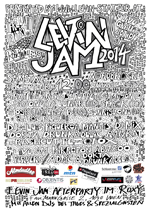 We would like to thank all participants, Sponsors and guests for making this a great event !!

I was truly glad to have made it this year to Levin jam in Wien
and participate in refreshing memory of a dear friend.

I actually didn’t know about the jam untill several years ago when
Papst mentioned it to me while we painted in Zagreb. He was in touch
with my brother Ivo and our friend Cazer so they called me for the wall.
Since he came from Wien and I didn’t know many writers from there,
both Dock and me decided to paint Levin and Nesh pieces,
cause Papst mentioning hometown reminded us on Levin.
Then he spoke about Levin jam and soon Peter contacted me again after
not being in touch for a long while. Last time Levin and me dedicated one
piece to him at Donaukanal while he was absent for business reasons.

The memory of Levin remains fresh as he was a good guy who actuall did good,
and didn’t only talk. I remember his act of leaving the design studio who
decided to take nazi scum Heider as their client. It gave me inspiration for an illustration
for Spanish design magazine Belio, they were preparing an issue on theme ‚revolution‘
so I drew Levin’s face and noted ‚The revolution starts within‘ + explained them what
was behind the illustration. Fellas loved it and printed it.

Attached is a sketch Peter and Levin did in my old blackbook,
we’ve had some quite fun days around Zagreb back then.

I hope the event will keep on going through the years to come!